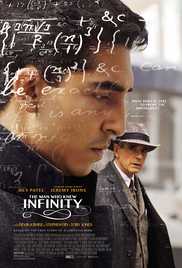 Dev Patel, Jeremy Irons, Malcolm SinclairIn the 1910s, Srinivasa Ramanujan is a man of boundless intelligence that even the abject poverty of his home in Madras, India, cannot crush.Forced to leave his young wife, Janaki, behind, Ramanujan finds himself in a land where both his largely intuitive mathematical theories and his cultural values run headlong into both the stringent academic requirements of his school and mentor and the prejudiced realities of a Britain heading into World War One.